Duct tape has many uses, but two have been particularly useful for me over the course of my days.

On my mission, my watch band broke. I couldn’t find a cheap watch that was water-resistant, so I decided to make my own band out of duct tape. It was folded in on itself of course, so the sticky stuff wouldn’t be against my skin. I used a little piece to fasten it, and that had to be replaced several times, but the band itself held out pretty well. I kept this method for over a year (even after my mission) until I finally got a new watch.

Unfortunately, this is the only mission photo I have that shows the watch band. It’s unfortunate, because this photo requires a bit of a story to explain. This is me during Shaft Week – a week where absolutely everything went wrong. The weather, teaching appointments, member visits, even lunch appointments. I was feeling pretty lame, so I decided to express my angst in the Biblical sense: with “sack-cloth” and ashes. Get it?
(If you think that explanation was long-winded, just be glad I trimmed this photo. The apartment we were living in here was a story in itself, as you may guess from the state of the walls and floor.)

I came up with this one today. We took our rings in to be re-rhodium-ed, and it will be a couple of days before we’ll be down there to pick them up. But my hand always feels a little odd without the ring. So I decided to make one out of duct tape. It actually looks pretty good – sort of like the titanium coloring a lot of wedding bands have. 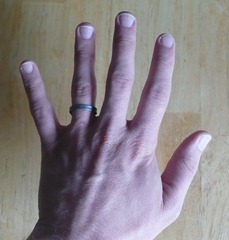