[Mild spoilers for Metroid & the first 6 episodes of The Mandalorian]

Okay so I really like The Mandalorian. And it's impossible to not notice certain similarities to Metroid games. Of course, Boba Fett came before Samus, so some of those similarities originated with Star Wars. But not all of them. Let's take a look at how much of them started where:

Who did it first?

Being an old geezer (okay, well at least half an hold geezer), it sometimes takes a while for the feeling of Christmas to kick in. And I'm not talking about the good feeling of doing good things for other people. Yeah, I know that that should be the focus, and I do try to do that. But that's not what I'm talking about. I'm talking about the feeling of looking forward to getting fun stuff and getting time off of school/work for a while while you enjoy it. But there are a few things that can instantly trigger nostalgia about Christmas. Maybe they're weird, but whatever. Here they are in chronological order:


And... nothing else comes to mind. I guess the older you get, the more the seasons blur together, and I guess once you can buy your own stuff you don't rely on Christmas in quite the same way for cool stuff and experiences. But that's okay, because there's usually enough nostalgia in the above things to keep me going.

Bonus question:
Since "Phendana" is a completely made-up word, why didn't they just spell it with an F? 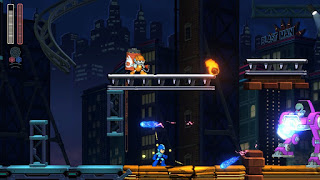 I love Mega Man games. But I specifically like Classic Mega Man games. Mega Man 8 is my least favorite (although the original is pretty weak too). 9 and 10 were super retro, and I love those more than 6 and 7. But when Mega Man 11 was announced, I was skeptical. The art style is modern, and there are voice clips that can get on your nerves (like in 8). Things do look better than 8 visually, but they didn't use the perfect 3D model of Mega Man from Smash Bros, and the cell-shaded look wasn't quite what I had hoped for. There was a free demo, and it was admittedly fun. (You can slow down time!) But the music, while sort of catchy, wasn't nearly as glorious as the tunes from 3 and 4 (and some from 2). None of this was exactly a deal-breaker, but it didn't feel worth the $30 purchase price. I didn't even get the game when it was on sale for 20% off around Christmas time, partly because I didn't want to encourage the developers to make another game just like it.

But a couple of weeks ago eBay sent me a $5 coupon for no apparent reason, and I figured buying Mega Man 11 used would be a good way to spend it - basically I got the game for half price. It was definitely worthwhile. All weird things aside, the game is fun, and it does feel like a Mega Man game. Way better than 8, for sure. 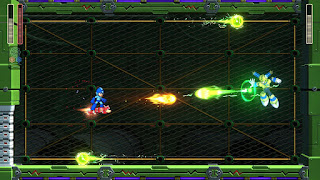 From the demo, my first impression was that the game is super hard. Even for a Mega Man game. on the "Normal" difficulty (how could I play it on a lower one?) I couldn't beat the single Robot Master that was available in the demo, although it didn't let you "buy" (with in-game bolts) energy tanks and the like. The real game was also really hard, and I didn't beat anybody until I had visited most of the levels. But once I had purchased a bunch of upgrades and a few energy tanks, I started cranking through things. The clock said like 5.5 hours when I beat it. Then on Superhero mode it took me another 3 or so. 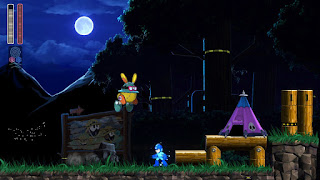 I actually do like the look, in general. The enemies managed to look classic in spite of the 3D cell shading. The robot masters look good too. And there's actually a fair amount of replayability, because the power ups you can get in the item shop are so useful that it kind of makes me wonder how well I'd do without them. Same with the slowing down time thing. In theory, it should be possible to do the game in a more classic style, once you know what to expect. 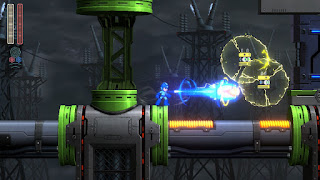 Final thing: even though I don't find my self humming any of the stage music (which is actually probably my biggest complaint), the stage select tune does get stuck in my head. So points for that. 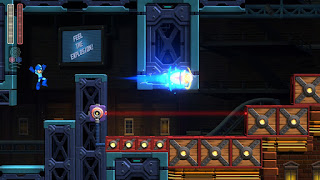 People have all sorts of traditions around funerals. A lot of the time I don’t get them. I imagine that most of the time they’re constructive – by which I mean that they serve to help grieving people deal with their loss and move on. And I’m all for that. (I’ll also admit that I haven’t yet gone through much of this kind of loss, so there could be some perspective that I’m missing here.) But I worry that sometimes the traditions we follow can have the opposite effect: they can end up making people worry more than necessary, in particular about how their actions or lack thereof might affect the deceased. In particular, I think people end up doing more harm than good when they treat funeral services like they are meant for the dead rather than for the living.

A basic principle that I’m quite confident is that once you’re out of this life, your level of happiness only depends on your relationship with God, and not on anything that any other person has done or not done. (You could argue that temple ordinances are an exception to this, but even then I that the timing we experience here is different from what post-mortal people experience so let’s ignore that for the moment.)

This principle is really important. Obviously in this life our happiness is affected by all sorts of things outside our control, from both human and natural causes. The Atonement of Christ gets rid of all that and makes happiness available to everybody And the Resurrection is guaranteed to everyone. If you know (or even believe) this, it is a source of comfort, even though it doesn’t immediately take away the pain of losing someone. That pain is real, which is why it’s important for people to address it, cope with it, and find ways to move on.

I think that one of the ways that people deal with it is through traditions that make them feel like they can do something of value for their departed loved ones. It helps them feel less helpless, more connected. I suspect that’s why people spend quintuple-digit amounts on caskets, flowers, and grave sites. It’s why they keep bringing flowers to graves. If that works for them, great. The problem comes when it becomes difficult or impossible for people to go through these traditions. I fear that they may end up feeling unnecessarily guilty for not having done more – or even worse, that they often spend unnecessary resources to go through with the tradition even when there’s pretty much no benefit for anyone except those getting paid to provide them.

All of this leads me to have a set of views that some might see as jaded or even cheap, but the motivation really is to make sure that all of the traditions we follow are aimed at the grieving family – because the dead are just fine without these efforts. I’m not judging people that believe or choose differently. But here they are, for what they’re worth.

I guess that covers it, actually. We can’t avoid the pain of losing people to death. But we can make sure that the traditions we follow don’t add to the burden of those who suffer loss and distract from the hope and peace that come from knowing that good people who move beyond this life are okay, and that we will be with them again.
Posted by Brian at 8:42 PM No comments: