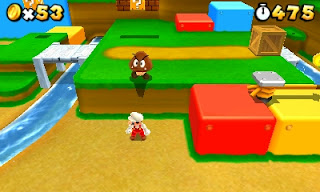 I got Super Mario 3D Land for Father's Day. For context, the last Mario game I bought or owned was Super Mario 64. (I have played a couple in-between though.) It was a bit of an internal struggle between that and New Super Mario Bros. 2 (Not to be confused with Super Mario Bros. 2). NSMB2 seemed more classic-Mario-y, but 3D Land seemed to do a better job of justifying my purchase of a 3DS, plus a friend had told me that he liked 3D World better than New Super Mario Bros U (sequels to both games in consideration). In the end, I went with 3D Land since reviews said it was longer, and it seemed to be a direct sequel to Mario 3 and 64, whereas NSMB2 seems to be a sequel to the other "New" games.

I'm very happy with my choice. It's not go-explore-stuff-y like Mario 64, but it definitely has a Mario-y feel - the enemies, platforms, and obstacles all translate well to 3D. And while you can play the game in 2D mode, I found it to be very difficult; the 3D capability of the console is a huge benefit in this case. The game started out pretty easy, but by the castle in World 5 it had gotten quite challenging. I did beat all of the levels without using the P-wing or white leaf cheats. Replayability was nice too - I had heard that there were "Special World" levels, but I didn't realize that half the game takes place after you beat it. (That was also a chance to revisit some of the gimmicks that had only shown up in one or two levels so far, like the colored platforms that appear and disappear in time with the music.) And while those levels were very challenging, I didn't have to go farming for power-ups or extra lives until the last three levels. (At that point, I beat 1-3 several times in order to get a Super Leaf, which makes most challenges much more manageable.)
Posted by Brian at 6:40 PM No comments: