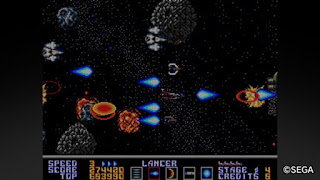 Back around the time I was introduced to Life Force for the NES, I was also exposed to Thunder Force III for the Genesis. I didn't actually play it, but I saw it enough to be intrigued by the power up system. You can get various weapon configurations which you can switch to at will, and when you get hit you only lose the current one. This is an interesting difference from Gradius and Life Force, where you power up and then stick with what you have, until you  make a mistake. (Also, in Thunder Force III you can change the speed of your ship on the screen at any time instead of having to power up to get to a decent speed like you do in Life Force.) When I made a game as my senior project in high school, I based the power up system on Thunder Force III. 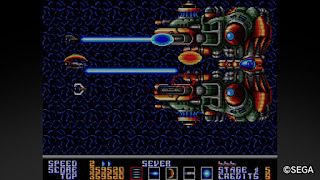 But I was always a Nintendo person - I never owned a Sega console. And I didn't realize that this game was eventually released (with some changes) as Thunder Spirits on the SNES. So I didn't get to really play the game until this week, when the arcade port was released on the Switch. It's very satisfying to be able to switch from one configuration to another depending on the situation: strong forward lasers, vertical missiles that then scour the floor and ceiling, a rear-firing cannon - even when starting a new life on Arcade Mode. And weaker wave and homing shots. Sometimes the obstacles and enemies feel cheap, but overall the power-up system (and nice graphics) offset all that. 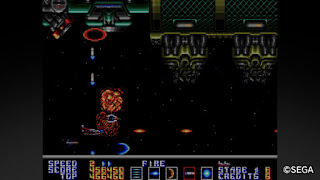 The music isn't quite as catchy as the stuff in Life Force or Gradius 3, but it's still pretty good.

The difficulty level is crazy as you'd expect, but there are various difficulty settings and a "Kid Mode" - which gives you extra continues (plus the ability to give yourself more, but that's cheating), plus you don't lose power ups when you use a life. That itself almost feels like cheating, but Super R-Type has Novice mode, which is pretty much the same thing, so I figure it's legit. After a few tries I beat the game on Kid Mode using three continues, and with later [with more practice] I finished it on Arcade Mode / Easy. My middle-school self would be so proud!