So, this is Sofia the First: 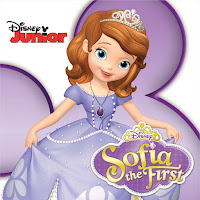 And cultured video game players know that this is Sofia III:

So one might reasonably ask, who is Sofia the Second? There's no obvious transition between those. But fortunately my son had an answer: she must be a cyborg. My daughter has illustrated it for us. 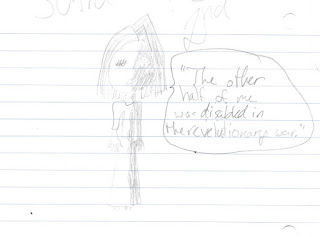 You're welcome, world.
Posted by Brian at 4:23 PM No comments:

I don't normally post a lot on current events (like on Facebook) because I feel like I'm preaching to the choir, given my limited number of contacts. But Trump's ban on people coming into the country from a set of supposedly-dangerous countries keeps coming up. And I made the mistake of reading comments on an article my sister posted. So now I have to yell some stuff to the universe.

First of all, the ban is not protecting anyone. Visa applicants were already being vetted. And there's no evidence that terrorists are leaking through from these countries. Most of the violence in America is caused by Americans. At best, we are inconveniencing innocent people and embarrassing our country. And it's not just inconvenience. Families are being kept apart. Our country has made a commitment to people and then just backed out on it without warning.

Of course, there's also the incompetence of how things have been handled. (Not communicating implementation details, no warning, etc.) But since the whole thing is ill-conceived to begin with, I'll move on. There's also the political agenda. Why not Saudi Arabia? Why not France? But again, the main problem isn't really how you came up with the list.

One thing that really set me off is the repeated comment I've heard that it's "only temporary". Come on. The internment camps in Wold War 2 were only temporary. They were also a blatant violation of people's basic rights. That event happened because people were afraid of what so-called "outsiders" might do, just like the sentiment now. I don't think those internment camps actually protected anyone - those people were American citizens and no less likely to be violent than any other citizen. But even if there was a spy locked up somewhere, it still wouldn't justify the camps, because a threat from a bad person is not an excuse to violate the rights of an innocent person.

And that's the key issue here, I think. Sure, the people involved aren't American citizens, and the magnitude of what's happening is less than in the internment camp example. But I really think the principle is the same: People are scared, and they want someone to hate. They think that if they can just push some people away, they'll feel safer. But by doing that based on where you were born - not what you've done or even what you think - the country is pretty much abandoning the whole created-equal thing. And I can't believe how many people are going along with it.

We are not safer as a result of this. But even if we were, it's an embarrassment to the country.
Posted by Brian at 10:03 AM No comments: