Blaster Master is one of my favorite NES games. It's half platformer, with the novelty of your character being a tank sort of thing, and half overhead (inside caves). The music is just glorious. The game has had many sequels, but none of them was particularly good. Last week, though, I was surprised and delighted to learn of a new game in the series. It's a reboot rather than a sequel, and it certainly looked like it might finally get things right.

Blaster Master Zero is pretty cool. In spite of how much I love the original, I have complained a bit a bout a few aspects of the game mechanics, and this game fixed them. Before, you could explore, but there wasn't really any incentive to do it if you could avoid it. In Zero, there are a ton of optional but permanent items that you can get, so it's a good idea to explore all of the caves and stuff. It also has some bosses that you fight in the side scrolling view. And of course there are save points now, which takes the difficulty level from frustratingly hard to extremely manageable. (The various power-ups you can get help with that as well.)

I do have two complaints. The first is that in spite of the "E" rating, the dialog includes some profanity (D* and H*). Not cool. If you ignore that (or skip the dialog), there's also the fact that the music, while not bad, isn't terribly catchy. The only exception is the Area 1 music, which is basically the same as the original (but still without the stirring intro). It's a gaping hole, considering the before-mentioned glorious soundtrack of the original.

I really did like the power ups. There are a bunch of blaster variations that you can switch among as long as you don't take too much damage in quick succession, and there are so many neat things you can do with the vehicle's cannon that at times it feels like you're cheating. But the game does have some interesting challenges in the second half, and I found the ending sequences particularly satisfying.

I kept meaning to take screenshots, but I didn't actually do it until close to the end, and I'm afraid including them here would reveal spoilers. But anyway, it was a fun game, and aside from those two complaints it was very nice to finally get a decent second dose of Blaster Master. I have now rescued my frog twice, so things are good.
Posted by Brian at 11:29 PM No comments:

The Plasma Master - in Print! 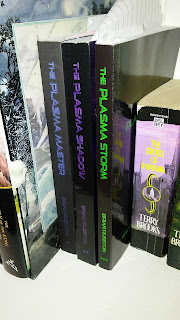 The Plasma Master trilogy is now available in paperback! Yay for self-publishing! As much as I love the whole e-book thing, I kind of see this as the definitive version, since it has formatted section breaks and stuff. And not only that, but I get the satisfaction of having written back-of-the-book summaries that don't spoil the plot, even if you read them out of order! I hate it when books have spoilers on their own covers.

In getting this ready for print, I actually found a ton of mistakes in the e-book versions that have been available for a couple of years, so that's pretty embarrassing, but I'm happy to have them fixed now. And since they only print them when people order, I can correct other errors on the fly - so if you do read this and find something wrong, let me know!

The only sad news is that it's obviously more expensive to read the books this way. Please don't go order it to "boost my sales" - I don't actually make any much more from a print copy than I do from the $1 e-book price : )


(Side-note about the picture: the first book pictured here has a matte cover because I forgot to switch it on the second proof. I'll update it when I have one with the glossy cover.)
Posted by Brian at 9:12 PM No comments: