In The Screwtape Letters, there's a discussion about how the ideal lie is that you should worship the devil, but now the strategy is to ignore spirituality altogether. In Sunday school today that sort of thing came up, and I figure there are several lies that the devil would like us believe, some blatantly wrong but some very dangerous even to active disciples of Christ.

On some level, it almost doesn't even matter which of these lies you choose to believe. They're certainly different in magnitude, and the earlier ones are certainly more likely to lead you to do really bad stuff. But all of them have the effect of keeping people from accepting the Atonement of Christ. So I think it's useful to ask myself which of these I tend toward.

Here's a list of the lies, in order of preference for the bad guys:

Lie #1: There is a god, and it's the devil.
• Not very convincing for most - not really even logically valid. But the Cain types embrace it for some reason.
Lie #2: There is a god, and it's [some other person or idol that embodies evil principles].
• This is almost as damaging as the first option and is a little easier to swallow.
Lie #3: There's a god, and it's you.
• This one is much easier to convince people of. Once they've accepted it, all the bad parts of their carnal nature start to talk louder. Really, this is still almost as damaging as the first option.
Lie #4: There is no God.
• This is actually almost the same as #3, although basically-good people won't do as much damage with this.
Lie #5: God is real, but he's this distant being that doesn't really affect your life.
• It's so easy to believe in a god who doesn't expect anything from you. Not very beneficial, though. This is a very common belief.
Lie #6: God is real, but he hasn't said anything lately.
• Arguably, this comes close to implying irrelevance in a world where new issues keep coming up.
Lie #7: God is real and speaks, but he doesn't know (or care) about you.
Lie #8: God is real and speaks and cares about you individually, but you can't make it - you're not good enough to qualify for his plan.
• Insidiously, this bypasses what the plan actually is. It's an important truth that everybody is reachable, at any given place.
Lie #9: God is real. He has an important plan, and you can qualify for it. In fact, you already have. There's nothing more to do.
• A lot of people jump to this. I guess it's actually compatible with lie #5.

The truth, of course, is that God has a plan for us that applies to us and will benefit us if we follow it. It is accessible, and God is eager to help us along the path every moment of every day. Following it and benefitting from it requires that we care about God's will and have the faith to keep trying to follow it. If we give up (due to a feeling of hopelessness or a misguided set of priorities), we're actively pushing God away. But he's always eager to invite us back.

Email ThisBlogThis!Share to TwitterShare to FacebookShare to Pinterest
Labels: Religion 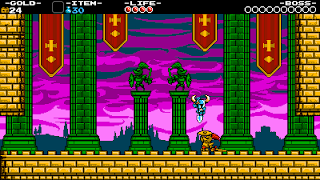 I had some Bing Rewards points burning a hole in my pocket, so went out on a limb and got Shovel Knight. It's a tribute to old NES-style games, incorporating elements of a bunch of them, most notably Duck Tales, Mega Man, and Zelda 2. I was a little hesitant about the 8-bits(ish) graphics - I mean, I was happy about that in Mega Man 9 and 10, but that's because they were building off the nostalgia of the original Mega Man games. Shovel Knight is a new thing. But as I played the first level, I had to admit it was pretty delightful. The feel is familiar, but the game is quite original. And when I was done, I found myself humming the first level tune. I knew I had chosen correctly.

The virtues of Shovel Knight are extolled all over the place on the Internet, but here's what I liked about it: 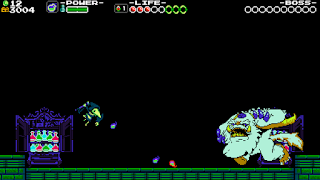 And not only that, but the game has a free downloadable "second quest" kind of thing called Plague of Shadows, where you play the game again as Plague Knight, one of the villains of the main game. The plot is kind of adorable - Plage Knight is trying to concoct the Ultimate Potion so his assistant Mona will like him. (At one point you can learn to dance. This doesn't affect the game at all, but if you try to do it near Mona, you just end up twiddling your fingers nervously. Poor Plague Knight.)

The gameplay is completely different - Plague Knight fights with bombs instead of a shovel, and the power-ups can be used to configure those bombs at any time. It turns out being easier I think, but it's still challenging - really it feels like a completely different game.
Posted by Brian at 7:45 PM No comments: