I got Mario Maker for my birthday. (The 3DS version.) I was a little put off by the fact that you can't search for levels by ID or publish levels online like the Wii U version, but the fact that it comes preloaded with 100 levels from Nintendo means that it's essentially an entire game's worth even without the make-your-own-level stuff, so I figured it was worth it.

The Course Challenge (comprising those 100 levels) is definitely awesome. The levels are creative, and most of them aren't that hard to beat, but each one has two challenges, like defeating all of certain kind of enemy, or collecting all the coins, or sometimes some pretty obscure stuff like never pressing the jump button. Some of them are super hard, but I finished with like 85 lives left, so I can't really complain about those.

The course designing stuff is great too. I don't have tons of ideas bursting to come out, but I have designed a couple of levels that I'm very proud of (and therefore a bit sad that I can't share them outside my family). My first was a simple thing that just throws goombas at you in just about every form imaginable. 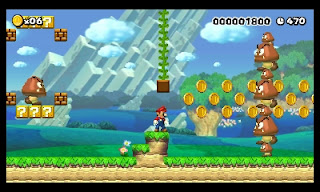 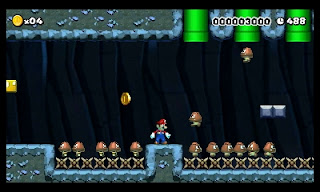 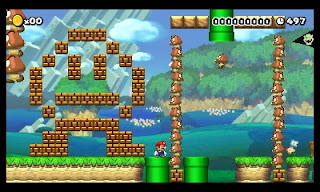 My second level is a Gradius-themed level, which features a super cool recreation of a common Gradius boss that makes me very happy. A screenshot is below. The large goombas serve as the "cores", which you have to blast through the barriers to reach. Each goomba has a key, which makes defeating the "boss" a requirement. The cannons and flame jets hopefully help make the thing look like a space ship. 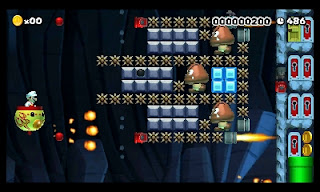 My most recent level is a conglomeration of simple castle towers. It's inspired from level 4-3 in Mario 2, which I love. Mine has multiple levels on the outside of each tower, and each tower has something to set it apart from its neighbors so you don't get lost (what it's made of, how you get to different floors, etc.). There are eight keys you have to collect, so exploration is mandatory. I'm especially fond of the bits at the end where you use the keys - designing little buildings and niches is fun. 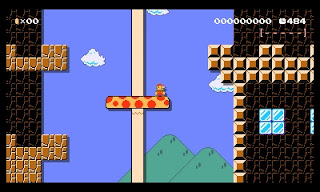 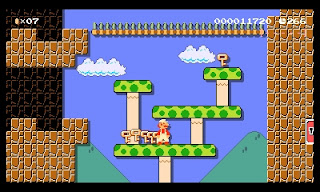 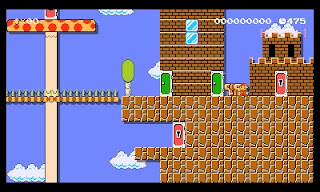 My favorite Mario game is Mario 3, but I didn't use that theme for either level. That kind of surprised me, but I think I figured out why: The things that make Mario 3 superior to the other Mario games don't really apply in Mario Maker. The control in this game is good regardless of which theme you choose, and all the themes have the same amount of variety in level elements and enemies. And I've always liked the original Mario music better than anything in the successors. Plus, the Mario 3 theme gives everything a shadow on the background, which looks a little weird (and wasn't in the original). Mario 3 does have a better look for goombas than the original, but then the Wii U version makes them look perfect (if less nostalgic).

Speaking of differences, they added some mechanics in this game that aren't exactly in the "real" Mario games, like Bob-obms blowing up hard blocks, and being able to put buzzy beetle shells on your head as protection. But that sort of stuff enables lots of different types of puzzles, which adds to the epicness of the game, especially since there is no state (other than sometimes lives) carried from one level to the next. So I'm down with it.

I haven't actually filled out the whole Gradius level yet, and after that I don't have specific plans (other than maybe a jerk level filled with question blocks, some of which have keys, and maybe a little map or some other kind of hint system of where to look). But my kids have a blast with it, even though none of them is very interested in actually playing Mario levels. If they would just add the ability to search for specific stages, it would be pretty much perfect. In the meantime, stacking giant goombas is pretty fun.