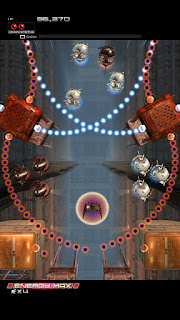 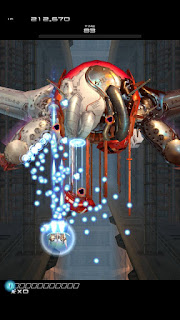 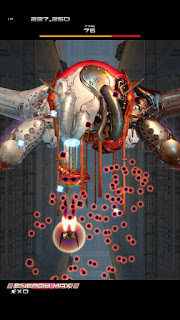 I've said before that I'm a fan of space shooter games - like 2D-scrolling things where you're a starfighter (or sometimes a dragon) and you blast through an environment full of robot ships and monsters. The genre captures a lot of science-fiction-ness in a simple format. And often the music is great. These games are also super hard - usually a single hit will blow you up, unless you get some kind of shielding.

Ikaruga is an innovative twist on space shooter games. All the enemies and shots are either dark (black/red) or light (white/blue). Your ship can switch between these two polarities at will. Touching a shot of the opposite polarity will blow you up, but you can absorb shots of the same polarity, converting them to ammo for your homing lasers. Your shots do double damage to ships of the opposite polarity. That's pretty much it - super simple. It's also insanely hard, even though it's only five levels long. 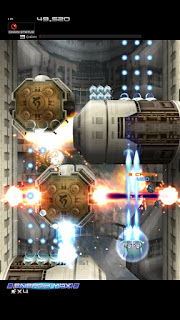 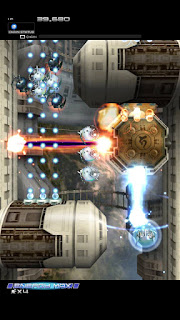 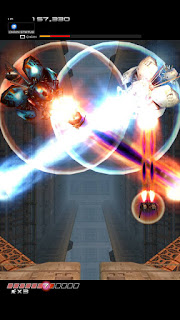 The game had my interest ever since it came out on the GameCube like 15 years ago, but I just got it recently. It was rare at the start, and then it kept getting re-released on consoles I didn't have. Also I wasn't sure I wanted to invest the time it would surely take to really play the game. (It also has super weird character art, and this weird point system that incentivizes you to destroy enemies in groups of three of the same color, as if surviving wasn't hard enough.) But now it's on the Switch and super cheap.

I really like it. Conveniently, the Switch version has a bunch of previously-unlockable options available from the start, like playing individual chapters and infinite continues (which is basically invincibility). This is a good thing, because Ikaruga is actually in sub-genre of space shooters that I'm not generally a fan of - it involves a lot of dodging a relentless stream of shots, rather than destroying enemies before they can fill the screen with shots. But this one is exceptional because the shots are your friends, if you do it right.

My son and I blasted through the game with the infinite continues, and then I did it alone, but of course that is cheating. I used 13 continues if I counted right, but the largest number you can have short of infinite is 9. Eventually I beat it with just those 9, and then 6. So no cheating! (That's on Easy difficulty; maybe someday I'll do it on Normal.) [Edit: I eventually beat it on Hard!]

In the mean time, the music gets stuck in my head all the time, and the gorgeous lasers blasting through enemy metal is simply delightful. And even when it's insanely hard (like at first, or if you turn the difficulty up), there are these moments where you feel like you're in the "zone", switching colors quickly to skip through otherwise impossible energy fields. It is glorious. Here, check out these shots of the almost-final battles: 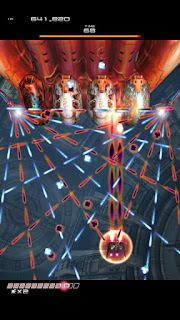 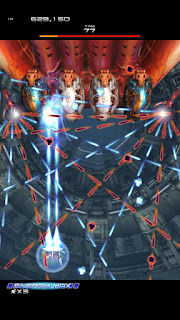 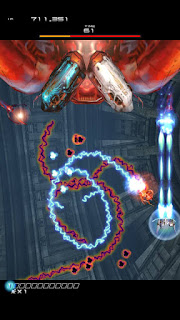