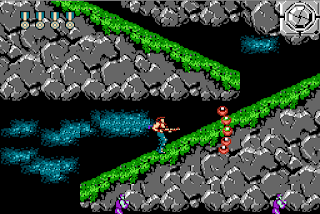 Contra was a thing back in the day - probably one of the top five or so NES games you'd have to call "classic". It was said to be super easy to beat, but this was clearly bunk. You had to use the Konami Code to even have a shot, and even then it would take more practice than I had time for the few times I played it. It was a two-player game, so technically I was playing when the game was beaten, but the two-player-ness plus the cheat code to start with made me think it didn't count. So back in my college days when I was collecting classic games, I skipped this one.

There was one thing that gave Contra a special place in my heart, though: the music during the ending credits is this super triumphant, super catchy tune. (So much so that every Konami game I've beaten has disappointed me with its ending.) Some time later, I realized that Contra actually has several catchy tunes. So when I racked up some Bing Rewards points, I figured Contra would be a good thing to get on the Virtual Console.

Except for one thing: it's not on the Virtual Console. Its sequel, Super Contra is, as is Contra 3 for the Super Nintendo. After much debate I got Super Contra, It's pretty cool, with pretty much the same feel as the original. Except that it doesn't have any catchy tunes. I like the overhead levels better than the fake-3D levels in the original, though. (Most levels in both games are side-view.)

Since I was going to be cheating anyway, I made shameless use of the Virtual Console's save-state feature. (After an initial run with the regular cheat code, with which I got to the midboss of Area 3 before getting running out of continues.) I didn't cheat as much as I could have, though - I only saved at safe spots, and I never saved during a boss fight. It took me a lot of tries, but I beat it. And I was proud to figure out how to beat the Level 3 boss without getting hit. (Also the Area 4 one, but that's more obvious.) Yay! Anyway, once that was done, I played it again with just the regular cheat code and got to Area 6 before running out of continues. And finally, I played it saving only at the start of each level. I still lost a few lives without reverting, but maybe not more than I would have gained in the process. So eventually I suppose it would be possible to beat it without saving state. I guess. I still don't know how anybody puts in enough time to beat it without cheating though.

Yay for saving the world from aliens!
[Edit: Check the Video Games tab - five years later I did beat this without cheating, along with the original and the Game Boy one!]
Posted by Brian at 2:40 PM No comments: