I had some time to kill on vacation so I downloaded Skyward by Brandon Sanderson and read it. I really like it. 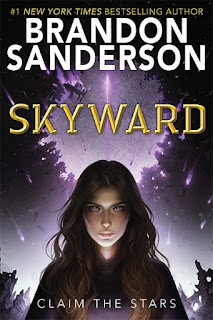 I guess it's a "young adult" novel, but only in the sense that it's not as graphic in the violence department as Mistborn (also by Sanderson and also really interesting and well-written, but a little harder to recommend). It's about this girl who wants to become a starfighter pilot. That's cool on its face, and the setting and sci-fi mechanics are definitely original. It takes place on this planet were a group of humans have crashlanded and then lost their history due to an alien attack. The planet is protected by a shell of automated defense platforms, so the aliens that attack them have certain disadvantages too, so there has been sort of a stalemate, where the humans have managed to defend themselves, but they're slowly losing.

Sanderson is well-known for creative magic systems - magic in his books always follows specific rules, so it never feels like a hack. This book replaces magic with technology, but it's a similar thing - there are a few specific weapons and items that the humans have available, and it's interesting to see how the characters use them creatively. (The flight/shield/weapon mechanics are definitely a little clunkier than I'd want, versus Star Wars or The Plasma Master. But the limitations are unique and help drive the story.)

The characters are great too. Several of them are delightfully funny. And the starfighter battles are pretty vivid. And importantly, while there are few plot elements that feel like obvious foreshadowing, things don't turn out quite the way you'd expect. There's good suspense right up to the end.

So basically, go read it!


"Well?" I asked Doomslug the Destroyer. "Think it will work?"

This is the first time the name "Doomslug" is used, so I was a little confused at first. Glorious.
Posted by Brian at 6:49 PM No comments: