In 1993 the Super Nintendo was a couple of years old, and I figured I'd get one eventually. But there was a brief period when I considered getting a Genesis instead. This was because of Sonic the Hedgehog. Something about the ads (specifically a bit from Star Light Zone) captured a sense of epicness, and because the ridiculous idea of a blue jumping hedgehog was more compelling than his plumber counterpart. I rejected this notion because I realized that despite the fact that Mario isn't that interesting as a character, Nintendo would always be the home of games like The Legend of Zelda (and I probably assumed Mega Man as well). But my friend got a Genesis and Sonic, so I sort of got the best of both worlds. 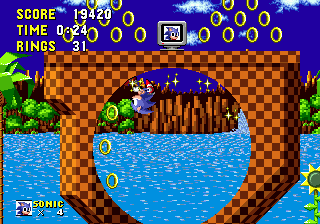 I loved Sonic. The game has great music and a beautiful, colorful world. I love how Sonic balances casually on one foot of you stand on a ledge, and (in the second game at least) waves his arms frantically if you are just one pixel away from falling. And I'll just repeat that the music is wonderful.

Sonic has a bit of an advantage over Mario in that he can gain a hit point much more frequently than Mario can, although Sonic never gains a long-range attack. On the other hand, though, Sonic games tend to require faster reflex, or at least a good idea of what is coming up next, and I had never seen a map of a Sonic level. Also, getting extra lives is harder; while collecting 100 rings will give you an extra life just like coins in Mario, in Sonic you lose all your rings whenever you get hit, and you always start a level with zero rings. This is balanced by some handy cheat codes, with which I beat the last level. Of course, that's not super satisfying, but one time, with guidance, I was able to get very close to beating it for real. Very close. Like, to the last battle, with one life left. But even though I had beaten Dr. Robotnik before, I lost that time. I was devastated.

Years passed. I told myself it was fine, because the game has this ridiculous ending anyway, in which it says "Try again" if you didn't collect all of the Chaos Emeralds, which you have a limited number or chances to collect and which require a totally different skill set from the rest of the game. (And that skill set includes a lot of luck, as far as I can tell.) And besides, Sonic is Sega character, and I'm a Nintendo fan.

But Sonic has been re-released since then. My in-laws had such a re-release for the PlayStation, which allowed saving and reverting state without a cheat code, so when I beat Sonic 1 on that, I figured it was a legitimate win, even if not the most satisfying one. (I saved only at the start of levels; saving mid-stage is a cheat no matter how you view it.) And last December I got the first two games on the 3DS for like $3 each. These editions also included the stage select without having to enter a cheat code, so I figured I could claim I could finally finish Sonic 2 that way.

Skipping some details - Today I beat Sonic 1 without any cheating! I looked at maps to find where extra lives and dangerous spots were, which helped. I actually finished with like 23 extra lives. I only got one Chaos Emerald, but you can play it again to collect more (I think), so maybe someday I'll do it. (I actually beat Sonic 2 legitimately a week or so ago.)

I only ever played the first two Sonic games - the only ones my friend got. And I have since learned that the later games used a different music composer. But those two are glorious and classical, and I'm really happy to have finished them for real.
Posted by Brian at 9:17 PM No comments: