Any Metroid fan will agree that there aren't enough Metroid-like games in the world. So whenever I hear about one, I want to want to play it. But there's often something that shuts me down, like an icky theme or a super melodramatic premise or tone. Axiom Verge is an indie game (like literally by one guy) that is super popular but does have a weird/dark plot. But a sequel came out and people have been raving, so I gave it another look. The plot isn't sadder than Ori, and the icky factor is actually less than the worst of Super Metroid (although in the latter game you can avoid the worst of it). So I went ahead and got it.

Exploring the world is delightful. The visual and musical tone are very reminiscent of Super Metroid and Zero Mission. The whole experience feels familiar - in the sense that it's weird and alien, but the creatures from Metroid would feel right at home there. The power-ups definitely have Metroid-esque analogs, but they are unique at the same time, and it's fun to be surprised with how they enable you to get past the game's various obstacles. 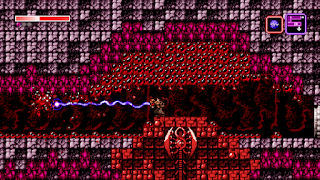 And just like in Super Metroid, you can get lost and stuck. I got super stuck at one point. It ended up being just a matter of having forgotten about one little spot, but as I explored everywhere, I kept finding optional power-ups. That's a sign of good design, in my opinion. And of course when I finally found the way forward... well then I got stuck again, but after that, it was super satisfying. Another time I wandered all over the world trying to find that next item that would let me progress, only to realize that I already had the ability I needed, but I had never thought to use it in a certain way. And believe it or not, realizing that was a good feeling.

I like the boss battles. They're not super complex, but the bosses look cool, and it's satisfying to figure out what to do. (It's usually much simpler than what I expect going in.) 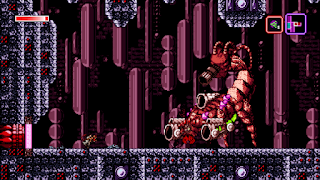 There's a lot of variety in items to collect. I mentioned the abilities that would correspond to "suit upgrades" for Samus, which are the main source of innovation regarding how you get around the world. But there are also upgrades to health and attack power, that sometimes come in pieces you need to collect a bunch of to equal one upgrade. So there is always a reward for exploring. There are also a lot of different weapons. None of those is strictly required except for one you get early on, but there's a lot of variety in how they work, so you can pick what works for you (or what looks the coolest).
The plot is decent but super confusing. The ending - I don't know if it was trying to lead into a sequel or just to cement the feeling that you don't know what the heck is going on. And of course I could have done without the bits of profanity thrown in, and the icky white remains of the former population. (In Metroid, you're always exploring ruins, but you generally don't actually run into the former inhabitants.) I was also a bit thrown off by this item you can get that allows you to enter codes that supposedly alter reality. One of them is obvious, but it doesn't seem to do anything. In fact, even after finishing the game I have no idea what you're supposed to do with it, or what any of the other codes are.
But that aside, Axiom Verge is the most Metroid-like game this side of an actual Metroid game, and that includes Ori. It is glorious.
Posted by Brian at 4:04 PM